With the creation of the Banking Union and the launch of a new macroprudential policy framework, banking supervision in Europe has become significantly more complex than it used to be. The coexistence of micro- and macro-prudential regimes that rely on similar tools to pursue different objectives may at times give place to conflicting policy interventions. This risk is structurally higher in bank-based economies with highly concentrated banking sectors. It may be further heightened in the contractionary phase of the cycle, when policymakers face a short-run trade-off between the resilience of the financial sector and the speed of the recovery. Coordination is thus a critical issue today in the euro area. In order to deal with it, supervisors need to agree on a ranking between their policy objectives, internalise the interactions between micro and macroprudential tools, and consider the general equilibrium effects of their interventions on the economy of the area. 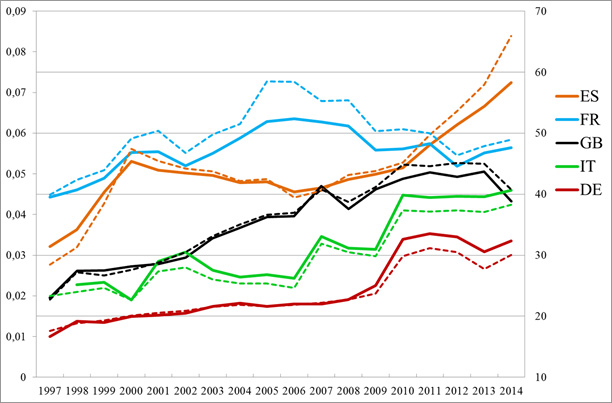 Source: ECB Statistical Data Warehouse. For each country, the continuous line is the Herfindhal index calculated on all domestic credit institutions (left axis) and the dashed line is the share of assets held by the five largest domestic banking groups (right axis, in percentage points).

Alessandri, P., and Panetta F., (2015). Prudential policy at times of stagnation: a view from the trenches, Bank of Italy Occasional Paper n.300, December.

Draghi, M., (2014). Monetary Policy in a Period of Prolonged Inflation, speech delivered at the ECB Forum on Central Banking, Sintra, May.

Piergiorgio Alessandri is research fellow at Bank of Italy. He previously worked as a Senior Economist at Bank of England. He has been visiting scholar at Norges Bank.

Member of the Governing Board and Deputy Governor of the Bank of Italy from 8 October 2012.
Member of the joint Governing Board of the Insurance Supervisory Authority (IVASS) as of 1 January 2013.
Member of the Board of Directors of the Bank for International Settlements (Basel) and Alternate to the Governor in the Governing Council of the European Central Bank (Frankfurt).
Member of the Supervisory Board of the Single Supervisory Mechanism at the ECB.
Member of the Committee on the Global Financial System and of the Board of Directors of the International Journal of Central Banking.
After graduating with honours in Economics from LUISS University (Rome) in 1982, he obtained an M.Sc. in Economics from the London School of Economics and a Ph.D in Economics and Finance from the London Business School.
He joined the Bank of Italy's Research Department in 1985, becoming head of its Monetary and Financial Division in 1999. From 2007 to 2011 he headed the Economic Outlook and Monetary Policy Department. In July 2011 he became Managing Director with the task of coordinating the Bank's activities relating to the Eurosystem and to financial stability. From 2010 to 2012 he chaired the editorial committee of the Bank of Italy's Financial Stability Report.
He has represented the Bank at various international organizations, including the OECD, the G10, the Bank for International Settlements (BIS), the European Central Bank and the International Monetary Fund. He has chaired international working groups within the G10, the BIS and other international institutions.
He has taught university courses in Economics and Finance. His research has been published in international scientific journals, including The American Economic Review; The Journal of Finance; Journal of Money, Credit and Banking; European Economic Review; Journal of Banking and Finance; Economic Notes; and Il Giornale degli Economisti.
He is the author of Il sistema bancario italiano negli anni novanta: gli effetti di una trasformazione (Il Mulino, 2004) and Il sistema finanziario e il Mezzogiorno. Squilibri reali e divari finanziari (Cacucci, 2006) with L. Cannari.
He is a member of the Società Italiana degli Economisti, the American Finance Association and the American Economic Association. In 2006 he was awarded the “Premio Giornalistico Internazionale Santa Margherita Ligure per l'Economia” as the best writer on economics.