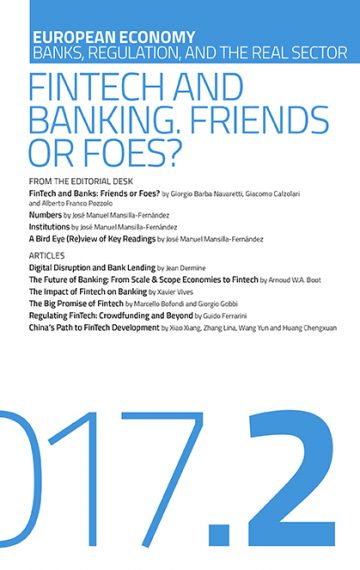 The Future of Banking: From Scale & Scope Economies to Fintech
by Arnoud W.A. Boot

The Impact of Fintech on Banking
by Xavier Vives

The Big Promise of Fintech
by Marcello Bofondi and Giorgio Gobbi

Regulating FinTech: Crowdfunding and Beyond
by Guido Ferrarini

FinTech and Banks: Friends or Foes?

BY JEAN DERMINE
The paper assesses the threat posed by digital banking as seen in the context of a long series of financial and technological innovations in the banking sector. It focuses on the economics of banking services and banks’ two main functions – as providers of liquidity and loans – and analyzes whether these could be displaced by peer-to-peer and marketplace lending.

The Future of Banking: From Scale & Scope Economies to Fintech

BY ARNOUD W.A. BOOT
Information technology plays a leading role in the transformation of banking. The deepening of financial markets has profoundly affected the business of banking. The recent focus on fintech – basically, new technology-driven players entering the financial services industry – is the latest manifestation of the impact of information technology on the industry.
This paper will focus on the structure of the banking industry going forward. We will try to draw lessons from the (older) literature on scale and scope economies in banking. Much uncertainty remains as fintech will lead to a disaggregation of the value chain, and will challenge the bank-customer interface at the core.

The Impact of Fintech on Banking

BY XAVIER VIVES
The influence of fintech is beginning to be felt in the banking sector and capital markets. This article surveys its development and its impact on efficiency, banking market structure, strategies of incumbents and entrants, and financial stability. Fintech has a welfare-enhancing disruptive capability but regulation needs to adapt so that the new technology delivers the promised benefits without endangering financial stability.

The Big Promise of Fintech

BY MARCELLO BOFONDI AND GIORGIO GOBBI
Fintech is introducing in the financial landscape new products, new business models, new players. In this paper we elaborate on the relationship between Fintech and banks, bearing in mind that in the past innovation triggered widespread financial instability. We argue that Fintech represents a serious challenge for the traditional banking business model. However, we build on the evidence on the development of shadow banking to caution against early predictions of an irreparable decline of banking institutions. We conclude that a flexible, pragmatic and open minded approach to Fintech regulation is the second best in a world of huge uncertainty about technology and consumer preferences.

Regulating FinTech: Crowdfunding and Beyond

BY GUIDO FERRARINI
The challenges posed by FinTech to regulation are similar to those raised by financial innovation in general. The first is to identify those areas of the law dealing with each type of Fintech instrument or institution. The second challenge is to establish whether regulation should be incrementally adapted to the various types of FinTech focussing on their function, or radically reformed by enacting special regimes and/or introducing ad hoc exemptions for FinTechs. In this paper, I consider loan-based crowdfunding and investment-based crowdfunding as meaningful case studies and analyse their regulatory treatment in European jurisdictions, which may be found in different areas – banking, payments, securities or ad hoc regulation – depending on the country considered, the business model adopted, the attitude and relative power of financial supervisors. Moreover, I offer an example of functional approach to crowdfunding policy by suggesting ways in which the two main types of crowdfunding (equity-based and loan-based) could be regulated in Europe along the model of securities regulation. In principle, I shun a holistic attitude to FinTech, as well as claims for radical reform in this area such as those advanced by recent scholarship. I prefer a pragmatic approach to FinTech differentiating the services to which existing regulation can be adapted from those – such as electronic payments and mobile payments – that have attracted special reform promoting competition and transparency in the relevant fields. I consider the Payment Service Directives (PSD 1 and 2) as an example of this type of reform. I conclude that new provisions are often motivated by the need to enhance the protection of clients vis-à-vis FinTech institutions and tools. However, they are also aimed to reduce the transaction costs of services through technology and/or to promote financial innovation. The regulation of crowdfunding precisely shows the trade-offs between investor protection and financial innovation/economic growth, while PSD 1 and 2 offer examples of legislation which facilitates the disruption of traditional finance and promotes the competition between incumbent institutions and the new players, including large IT companies, telecoms and thousands of start-ups.

BY XIAO XIANG, ZHANG LINA, WANG YUN AND HUANG CHENGXUAN
In recent years, FinTech, driven by a combination of factors such as technological advances, financial deepening, and changing customer bases, has been growing rapidly in China, creating significant impact on traditional financial products, businesses, services, and organizational structure. This paper provides a systemic summary of China’s FinTech development on multiple dimensions including main business forms and technologies, focusing on the regulation and self-regulation of China’s FinTech industry, offering an in-depth analysis of the challenges the industry faces, and proposing corresponding recommendations to promote development.