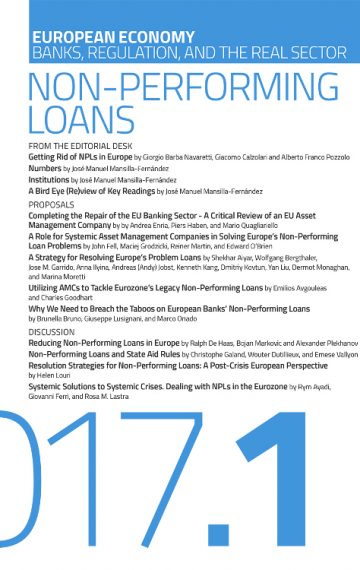 Getting Rid of NPLs in Europe
by Giorgio Barba Navaretti, Giacomo Calzolari and Alberto Franco Pozzolo

Completing the Repair of the EU Banking Sector- A Critical Review of an EU Asset Management Company
by Andrea Enria, Piers Haben, and Mario Quagliariello

Why We Need to Breach the Taboos on European Banks’ Non-Performing Loans
by Brunella Bruno, Giuseppe Lusignani, and Marco Onado

Systemic Solutions to Systemic Crises. Dealing with NPLs in the Eurozone
by Rym Ayadi, Giovanni Ferri, and Rosa M. Lastra

Getting Rid of NPLs in Europe

BY ANDREA ENRIA, PIERS HABEN, AND MARIO QUAGLIARIELLO
The final step in the repair of the EU banking sector is cleaning up legacy assets. Otherwise, all of the work we have done to strengthen banks’ capital and assess the quality of their assets will not have the desired positive impact on new lending into the real economy.
Progress is in train but has been slow to date. Although asset quality issues are particularly relevant in some Member States, this is a single market problem and coordinated action is vital for success.
The ongoing effort of supervisors in pushing banks to take action requires that the supporting infrastructure is in place. This means fixing legal systems, which will take time, and addressing market failures in the secondary market for non-performing loans (NPLs), which can be done now. There are legitimate questions about how this should be done, which are addressed in this paper, but those should not be a cause for delay. Whether it be a single European Asset Management Company or a coordinated blueprint for national governments to enact is less important than taking coordinated action urgently.

BY SHEKHAR AIYAR, WOLFGANG BERGTHALER, JOSE M. GARRIDO, ANNA ILYINA, ANDREAS (ANDY) JOBST, KENNETH KANG, DMITRIY KOVTUN, YAN LIU, DERMOT MONAGHAN, AND MARINA MORETTI
Shortly after the default of Lehman Brothers in 2008 several Irish banks faced acute funding problems. In order to avoid a systemic crisis the Irish government extended a wide-ranging guarantee to its banks. As credit losses mounted in tandem with deteriorating economic conditions, the solvency of the Irish State itself became threatened and eventually compelled Ireland to enter an EU-IMF Programme of Assistance. This paper discusses the alternatives available to European policymakers regarding the regulatory treatment of banks’ sovereign exposures in light of the Irish crisis. Of the various reform options, strict exposure limits seems to be the only regulation that would have materially affected Ireland’s crisis management. However, it is doubtful whether consensus on reform can be achieved.

BY EMILIOS AVGOULEAS AND CHARLES GOODHART
The recovery of the Eurozone (EZ) economy has made even more pressing the tackling of its debt overhang with the bulk of over 1 trillion Non-Performing Loans (NPLs) concentrated in the more vulnerable economies of the EZ periphery. There is clearly a need to adopt a more radical approach to resolving NPLs than merely augmenting supervisory tools and national legal frameworks. The discussion about the feasibility of country-based or Pan-European Asset Management Companies (AMCs) to tackle legacy NPLs has recently intensified. Yet political objections premised on fears of debt mutualisation, the structural and legal questions surrounding the possible establishment of AMCs, and differing recovery rates and levels of market transparency within the EZ have led to the dismissal of the idea by the European Council. This article discusses the merits and shortcomings of AMCs in tackling NPLs and proposes a comprehensive structure for a Pan-European “bad bank” with virtually ring-fenced country subsidiaries to ensure burden sharing without debt mutualisation. The proposed “bad bank” structure intends to resolve a host of governance, valuation, and transparency problems that would otherwise surround a “bad bank” solution. Also, the proposed scheme is in effective compliance with the EU state aid regime and could lead, if implemented, to the alleviation of the EZ debt overhang to stimulate credit growth.

BY BRUNELLA BRUNO, GIUSEPPE LUSIGNANI, AND MARCO ONADO
We propose a comprehensive, pan-European scheme to address the issue of non-performing exposures. We contend that securitisation is the most effective way to sell the bulk of troubled loans because it can rise the transfer price at a level closer to the real economic value, reducing the loss for the banks at bearable levels. Through a numerical example, we describe the main characteristics of a blueprint of securitisation to be implemented at a national level. We argue that this scheme could attract funds from a wide array of investors, while forms of public support can be worked out in terms compatible with the current European rules on state aid.

BY RALPH DE HAAS, BOJAN MARKOVIC AND ALEXANDER PLEKHANOV
The current overhang of NPLs in Europe is not exceptional in a historical perspective. However, despite the wealth of experience in NPL resolution accumulated after earlier crisis episodes, resolving Europe’s NPL problem continues to be a thorny issue. Difficulties reflect the chronic nature of the NPL malaise this time round but also the widely differing perceptions about the upside that NPLs may still present. For these reasons, NPL stocks are unlikely to decline fast and the costs of delayed action continue to accumulate. A number of promising resolution schemes – involving specialised asset management companies, specialised servicers, and/or securitisations – have been put forward. To be effective, these schemes will require hard policy choices to be made.

BY CHRISTOPHE GALAND, WOUTER DUTILLIEUX, AND EMESE VALLYON
Impaired assets such as non-performing loans (“NPLs”) continue to pose significant problems across the EU. When possible solutions are being considered, “bad banks” or similar impaired asset relief measures are often discussed. However, if they involve support by the State such measures need to be compliant with a set of EU law provisions. This article aims to clarify which interventions are considered to be State aid, and to give an overview of the compatibility conditions that apply to State aid measures. A brief explanation is also given concerning the recent changes brought about by the EU’s new recovery and resolution framework introduced by the Banking Recovery and Resolution Directive (“BRRD”).

BY HELEN LOURI
NPLs are a dominant problem for banks in the euro area as in some countries almost one quarter of loans are not serviced. NPLs represent a real challenge for bank profitability and financial stability. In addition, they constrain credit expansion and delay economic recovery.
Despite some recent progress, slow growth and persistent unemployment as well as low investment interest due to asymmetric information and a wide bid-ask price wedge, make extremely difficult the cleaning of banks’ balance sheets.
A series of options have been suggested with a view to improving conditions in the European NPL market and reinforcing investor confidence respecting at the same time state aid rules. Public intervention measures, such as asset management companies and other co-investment strategies are deemed necessary in order to increase market efficiency and create a virtuous circle of reductions in NPLs and increases in investment and growth much needed in the euro area.

Systemic Solutions to Systemic Crises. Dealing with NPLs in the Eurozone

BY RYM AYADI, GIOVANNI FERRI, AND ROSA M. LASTRA
We focus on the restructuring of troubled banks in the Eurozone. First, we review how legacy assets (mostly NPLs) were dealt in various countries (especially Japan, USA, Sweden and Spain), supporting a centralized solution in case of generalized banking crises. Second, drawing on the credit channel literature, we stress the need to differentiate between systemic and non-systemic events. Third, we theoretically advocate a systematic centralised Eurozone level approach to maintain fair recovery rates of restructuring banks’ NPLs. Our paper contributes to the lively debate on how to reinvigorate the EU banking system and thus avoid the related negative macroeconomic consequences.
This material was originally published in a paper provided at the request of the Committee on Economic and Monetary Affairs of the European Parliament and commissioned by the Directorate-General for Internal Policies of the Union and supervised by its Economic Governance Support Unit (EGOV). The opinions expressed in this document are the sole responsibility of the authors and do not necessarily represent the official position of the European Parliament. The original paper is available on the European Parliament’s webpage. © European Union, 2017