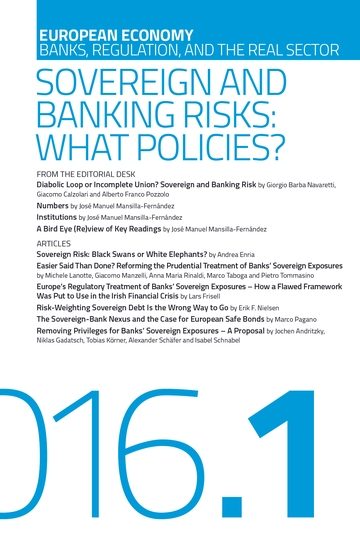 Risk-Weighting Sovereign Debt Is the Wrong Way to Go
by Erik F. Nielsen

ANDREA ENRIA, ADAM FARKAS AND LARS JUL OVERBY
It can be argued that sovereign risk refers to ‘black swan’ events as characterised in Taleb (2008), rare and extreme events with retrospective (though not prospective) predictability. In addition since banking risk is intrinsically linked to sovereign risks, it can also be denoted as a ‘white elephant’ type of risk, i.e. a risk that although it has the potential to be costly, it is also difficult, if not impossible, to dispose of. While both views have some wisdom, the truth probably lies in between. Sovereign risk has for long been highlighted as an issue, but perceived as unlikely to crystallise in Europe and too difficult to address effectively, given the strong interlinkages between governments, monetary policy and banking systems. Nonetheless, the current preferential treatment of sovereign risk in the banking regulatory framework was clearly challenged during the financial crisis. The lack of risk sensitivity and incentives in the prudential framework to manage sovereign risk actively may have led to complacency prior to the EU sovereign debt crisis, as empirical evidence illustrates limited diversification and significant home-bias in the holdings of sovereign assets. Consequently, increased reliance on mark-to-market valuations of sovereign exposures, standardised disclosure and regulatory incentives to diversify sovereign risk would lead to a more robust framework that, although it may not eliminate the risk of sovereign black swan events, will mitigate the impact and hopefully make the white elephant smaller.

MICHELE LANOTTE, GIACOMO MANZELLI, ANNA MARIA RINALDI, AND MARCO TABOGA, AND PIETRO TOMMASINO
In the aftermath of the euro-area sovereign debt crisis, several commentators have questioned the favourable treatment of banks’ sovereign exposures allowed by the current prudential rules. In this paper, we assess the overall desirability of reforming these rules. We conclude that the microeconomic and macroeconomic costs of a reform could be sizeable, while the benefits are uncertain. Furthermore, we highlight considerable implementation issues. Specifically, it is widely agreed that credit ratings of sovereigns issued by rating agencies present important drawbacks, but sound alternatives still need to be found. Should a reform be implemented and a measure of sovereign creditworthiness become necessary, we argue that consideration could be given to the use of quantitative indicators of fiscal sustainability, similar to those provided by international bodies such as the IMF or the European Commission.

LARS FRISELL
Shortly after the default of Lehman Brothers in 2008 several Irish banks faced acute funding problems. In order to avoid a systemic crisis the Irish government extended a wide-ranging guarantee to its banks. As credit losses mounted in tandem with deteriorating economic conditions, the solvency of the Irish State itself became threatened and eventually compelled Ireland to enter an EU-IMF Programme of Assistance. This paper discusses the alternatives available to European policymakers regarding the regulatory treatment of banks’ sovereign exposures in light of the Irish crisis. Of the various reform options, strict exposure limits seems to be the only regulation that would have materially affected Ireland’s crisis management. However, it is doubtful whether consensus on reform can be achieved.

Risk-Weighting Sovereign Debt Is the Wrong Way to Go

ERIK F. NIELSEN
The third leg of European banking union, the common deposit insurance scheme, has been postponed until an unspecified reduction in bank risk has been achieved. A reduction in banks’ domestic sovereign exposure has (mostly rightly) been identified as an objective, potentially via risk-weighting sovereigns. However, risk-weighting sovereigns is the wrong way to go because it both undermines the most fundamental concepts of government and governance (trust), and would build a strongly pro-cyclical element into policy making. There are simpler and better ways to achieve standardised limits on banks’ exposure to sovereigns.

The Sovereign-Bank Nexus and the Case for European Safe Bonds

MARCO PAGANO
During the euro debt crisis, banks’ holdings of domestic sovereign debt amplified the transmission of sovereign stress to bank lending and solvency risk in stressed countries. Yet, current proposals to reform European banking regulation of bank sovereign exposures meet with obstacles, some structural–namely, the scarcity and asymmetric provision of safe assets–and others transitional–chiefly the danger that regulatory change may trigger instability in the sovereign debt market. But both types of obstacles can be overcome by introducing a synthetic security resulting from the securitization of euro-area sovereign debt — European Safe Bonds, or ESBies — and by providing regulatory incentives for banks to replace domestic debt holdings with this security.